Clinton Keeling (1932-2007) in the later years of his life published a number of his own books on the history of zoos and the keeping of wild animals in captivity. He often referred to the books kept by London Zoo which listed the daily happenings. The books provide more than a glimpse into social history as well as the history of the Zoo and the Zoological Society of London.

In one of his books, A Short History of British Reptile Keeping, published in 1992, he referred to a few of the donors of reptiles and amphibians to the Zoo and bemoaned the fact that only in a few cases had he been able to trace who those donors where and what became of them. These are extracts from his book:


In my book They All Came Into The Ark I mentioned a number of people who had deposited reptiles and amphibians at the London Zoological Garden during the period covered by the first world war, and I can see no great harm in doing so again here, perhaps in a little more detail…

All I know about Master J.C. Dendy (as he was described in the Occurrences Book) was that he lived at Vale Lodge, Vale of Health, Hampstead, London N.W.1, that he kept a large herpetological collection and that, on 16th July 1915, he presented it to the Society. It comprised Chicken, Wolf’s [sic], Tessalated [sic], Dark-green, Say’s, King, Aesculapian and Corn Snakes, Seps (a primitive skink believed by the Arabs of North Africa to be poisonous, in fact the word “septic” is derived from its name), Green and Six-lined Lizards, Horned “Toads”, two terrapins, and Edible Frogs. As I say this is all I have to go on, but I rather suspect he was a public school boy who, adding a few non-existent years to his age, had decided to go to war — a state of affairs by no means rare in the early stages of the conflict — and such evidence that there is suggests he did not come back.

The history of keeping reptiles and amphibians in captivity has received little attention, particularly in the private, i.e. non-zoo, sector. I was intrigued by Clin’s examples and realised that by using a combination of genealogical sources and Google, of course, it should be possible to uncover more about the donors than Clin had managed. I chose the above extracts because on these cases I have been able to shed more light.


Lautreppe’s story starts easily enough but then gets more complicated.

He arrived in London on 14 January 1915 from New York, a 1st class passenger on S.S. Minneapolis. He had entered the U.S.A. from Mexico at El Paso, Texas on 5 December 1914. Lautreppe is shown as being 58, a mining engineer of French nationality and a permanent resident of France. Incidentally, the S.S. Minneapolis had only just returned to her Atlantic run after transporting the British Expeditionary Force to France at the outbreak of the First World War. In February 1915, she returned to military transport, and was torpedoed and sunk by a U-boat in the Mediterranean on 23 March 1916.

All the reports show that Lautreppe was a mining engineer and a plant- and animal-collecting naturalist who operated first in Peru and then Mexico. I think we can assume that he acquired the lizards and terrapins in Mexico and the U.S.A. or the U.S.A. as he travelled to New York. On this occasion, he had been in Mexico since 1914. He was en route to Mexico when he arrived from Le Havre in New York on S.S. La Lorraine on 13 April 1914.

We find him also crossing the border from Mexico to the U.S. in 1906.

There are a number of references to his plant collecting and of specimens arriving at the New York Botanical Garden. In the botanical literature he is listed as a collector from 1902 to 1905 in Mexico and Peru. Examples of references to him are:


Mr Albert de Lautreppe who was commissioned last year to obtain material for the Garden during his visit to Peru on a mining errand, has recently returned, bringing with him a notable collection of small cacti which have mostly been incorporated into the public series— in conservatory house No 5, a considerable number of other living plants and over two hundred packets of seeds which have been sown in the propagating houses. He also secured some herbarium specimens, principally of lichens. Journal of the New York Botanical Garden, volume 3, 1902.

Plants for the conservatories from Chihuahua and Rio Balsa, Mexico. Journal of the New York Botanical Garden, volume 5, 1904.

The average rainfall of Zacatecas for the past ten years, as stated by Mr Albert L. de Lautreppe, who has made a special study of the weather records in connection with his business venture...U.S. Department of Agriculture, Bureau of Plant Industry, Bulletin 102, 1907.

The following are from Addisonia (New York Botanical Garden), volume 1, 1916. 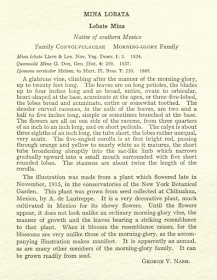 Lautreppe clearly had an interesting time in Peru. An article syndicated to a number of U.S. newspapers in 1902, dealing with the financing of rubber ventures by J.P Morgan and his associates in South America, discussed the border conflicts between Peru, Bolivia and Brazil. It continued:


But Peru has a plan to get in far ahead of them all and build a railroad that shall tap the rich country and carry its products to the Pacific Coast over the mountains.
To ascertain the best route, that nation commissioned a French engineer, Albert de Lautreppe, of Paris, to explore the country and find a road. He led an expedition and reported that the plan was feasible.
Now he has arrived in New York with remarkable news. He found immense rivers spanned by wonderful bridges made of basket work by the natives. More remarkable than all, he found tribes of cannibal Indians, whose boast was that they would never allow white men to pass through their country. By diplomacy and generous presents he managed to win, if not their friendship, at least suffererance, and he reached his objective point after many dangers but without being harmed.

The long article goes on to describe his encounter with the tribes and ends with the following paragraphs:

De Lautreppe says tha he can not tell why they permitted his party to cross their territory alive. “the Chunchos,” he says, “told us that they had massacred three white men in Carabaya just before we arrived. Just why we escaped trouble I can not explain, as they were entirely fearless and our firearms caused them neither surprise nor alarm. Somehow we had the luck to a peace which neither of us broke. It may be they were convinced that we were not after their women, which seems to be a great cause of tribal wars there. Most tribes are short of women, and, therefore, they raid each other frequently.”

All the tribes that he found exist solely by hunting and rove over great extents of territory. De Lautreppe says that the country throughout shows evidence of great wealth in gold, and that Peru can open it by building less than 400 miles of railroad, part of which, indeed, is already under construction.

After the war, on 19 June 1919, he was granted a patent in London for an invention submitted on 29 May 1917. Wireless control of distant apparatus. Improved means of controlling movement in two directions from a distance (GB 127848). The example in the patent is the control of a rudder by radio. Shades of drones to come.

One and the Same Person?

Things now get more complicated. In a letter from Vailima, his house on Upolu in Samoa, Robert Louis Stevenson wrote:

We have two guests in the house, Captain-Count Wumbrand and Monsieur Albert de Lautreppe. Lautreppe is awfully nice — a quiet gentlemanly fellow. Gonfle de Reves, as he describes himself — once a sculptor in the atelier of Henry Crosse, he knows something of art and is really a resource to me.

The question is, of course, whether this Lautreppe, the former sculptor, is our Lautreppe, the mining engineer and naturalist, in later life. I strongly suspect that he is since the writer S.R. Lysaght (1856-1941) describes visiting Vailima on Easter Sunday 1894 and meeting Lautreppe, a French naturalist [my emphasis]:

At dinner in the evening, when all the household was assembled, Mrs Stevenson and Mrs Strong, Lloyd Osborne and Count Wurmbrand, a charming and cultivated Austrian soldier acting at the time as chief cowherd on the Stevenson Farm, with the addition on one or two occasions of M. de Lautreppe, a French naturalist on a visit to the island, a delightful companion, we were a merry and odd-looking party. The Living Age, Boston, 10 January 1920.

Gonfle de Reves which, I think, translates as 'inflated dreams' implies that he had tried to be a sculptor and now did something different.

Robert Louis Stenvenson only survived a few months after this visit; he died on 3 December 1894.

It would also seem that our Lautreppe is also the author of an article on American Samoa: Our Samoa Station. The Island of Tutuila, The Latest Acquisition of the United States in the Pacific. This was published in Frank Leslie’s Popular Monthly, July 1900, and a summary appeared on several U.S. newspapers at the time. He also had an article on Samoa in the French periodical, L’Illustration, in 1898.

The only reference to a sculptor Lautreppe I have found is in L. Farrer’s Biographical Dictionary of Medallists volume 3, published by Spink and Son in 1907. Felicien William Albert Le Coq de Lautreppe, pupil of Henry Cros, exhibited a medallion depicting Sir William Gladstone at the Salon in 1883.

There are other possible references in the U.S. newspapers to Lautreppe. M. Le Coq Lautreppe organised talks on French songs with an accompanying singer. When he cancelled the event, the singer displayed great and public outrage at her treatment.

Lautreppe had presented animals to the zoo before 1915. A very incomplete search shows that on 25 September 1893 (remember he was, if it is the same Lautreppe, in Samoa on Easter Sunday — March 25th — 1894) he gave the zoo the gerbil, Gerbillus longifrons from Tunis (now included in Meriones crassus, Sundevall’s Jird) and Long-tailed Field Mouse (Mus [Apodemus] sylvaticus). Since the latter also occurs in north Africa, I would imagine he thought he had something less common than a species that could be caught in Regent’s Park.

Finally, and before dealing with Master Dendy in the next post, why did he collect and donate animals to London Zoo and why, in 1915, was he staying at 1 Ravenna Road, Putney? In the 1911 Census, 1 Ravenna Road was divided into flats. Was he staying in one of the flats on his return from Mexico in 1915? Was his stay in London connected with the patent application for a radio-controlled rudder? Help is needed from a French genealogist to take the story any further.